Kelvin Message: A life in music

Kelvin Message is a guitar specialist – a tech guy who played his first gig at 14 and who’s been professional ever since. Kelvin was also a musical impresario, providing UK musicians with a key south coast platform in the '70s folk scene.

Until he was in his mid-20s, Kelvin kept his engineering day job. In 1976 however he jacked it in and became a full-time professional musician and guitar tutor. Kelvin still had a family to support though. Paying the bills came first, but, he ruefully admits, my family didn’t. “You don’t think about it at the time,” he conceded. The allure of overseas gigs and organising music events got in the way of a steady family life. The kids have all grown up and all the wives and partners are dead, or gone, he observes sadly.

Kelvin has had a stab or two at the big time, releasing a single in 1973, and playing on the same bill as many famous musicians. His musical career actually began at a church school where he sang soprano in the choir until his voice broke and that particular career path ended. His dad encouraged him to take up an instrument instead. The harmonica proved a disaster, but he played a toy guitar until he had destroyed it.

At 14, 'The Vandeanon Sound' were launched on unsuspecting punters at St Stephen’s Methodist Church Hall in Hampden Park. Apparently taking their name from a Tolkien character, the band helped satiate the burgeoning beat boom demand. They were paid 5 shillings for their trouble. Officially Kelvin couldn’t play in pubs, and obviously he couldn’t drive. So, still at school, he relied on his parents to get both him and his gear to gigs. In some pub venues though, wearing "long trousers” might get him in, he says. These days we are all trying to look younger, he notes ironically. “Keep taking the pills and wear a hat,” he strongly advises.

Kelvin had been playing rock covers in what, initially, were non-amplified bands until one day in 1970 he had an epiphany outside The Dolphin pub in South Street, Eastbourne. On his way to a regular afternoon gig at the Habib Restaurant directly opposite, an old guy spotted the guitar case and, somewhat absurdly, asked Kelvin whether he could play. “I like to think so,” was his faux modest response. That night, peering through a hole in the wall in a back room of the pub, he spied proceedings at what would later be referred to as a “folk club”. Kelvin was mesmerised by the playing of acoustic guitarist, Johnie Winch. Johnie, from Hastings, would become renowned on the UK folk circuit in the 1970s. He and Kelvin often played together and remained friends. Like many so-called 'folk' guitarists, John Renbourn and Bert Jansch included, Winch’s style was heavily blues-influenced, and, like them, his fluidly combined melody, rhythm and bass. Johnie was doing the work of three guitarists, Kelvin says.

Kelvin would do his own turns at The Dolphin, and at The Crown as well. After a few years he decided to branch out and form his own folk club at The Lamb. I had noticed that at a certain point in proceedings at the Dolphin, everybody would up-sticks for another venue, he says. This mobile crew were as much performers as fans, so we needed a following like this to run our own club, he says.

The Lamb pub in Eastbourne still has a folk club thanks in part to Kelvin for founding it in 1976 and running it until 1993. In the late 1970s and ‘80s he put on folk line-ups in various Eastbourne theatres, including The Hippodrome and The Tivoli, and played electric guitar in rock acts, acoustic in folk combos, and ran music nights throughout the town. Kelvin helped found the Eastbourne Folk Club at the Terminus pub too.

We would have ‘club swops’ where singers and musicians from folk clubs throughout Sussex would perform at each other’s venues, he says. Hastings was a major folk venue in those days, and Kelvin worked closely with Keith Leech, who runs The Jack in the Green Festival, and who he describes as having been given an MBE “for services to folk music.” “Where’s my bleedin’ gong then,” he asks rhetorically.

Davey Graham played in Eastbourne, he noted. The celebrated Anglo-Caribbean guitarist helped launch the second British folk boom in the mid-60s. He was, Kelvin says, basically playing piano music on an acoustic guitar. The same is true, he says, of his personal folk guitar hero, Ralph McTell. To make his point, Kelvin promptly picked up an acoustic and deftly played with ragtime syncopation. Kelvin agrees that his old guitar sparring partner, Terry Lees, has a flamenco inflection to his playing.

In 1971 Terry came down from Leicester and helped put Eastbourne on the folk map by coming runner-up in a national finger-picking competition in the mid-'70s. Kelvin and Terry gigged together in Holland. Kelvin would pack up work at 5 o’clock on a Friday and high tail it down to Harwich with Terry for the ferry crossing for a weekend of gigs and be back at the factory at 8am on a Monday morning. Picking up on the flamenco theme, Kelvin launches into a virtuoso display of how a music not normally associated with UK folk was, like ragtime, like jazz, essentially a dance music. Spanish players, noted Kelvin, would keep their heads down. Not because they were being modest, but because they were watching the dancers’ feet and would improvise accordingly in order to drive the dancing on.

Listening to Kelvin, I was reminded of what Gil Scott-Heron says on his final album, that what would later get called jazz music was simply dance music, and the best players were those who could keep people dancing the longest. Kelvin understands that labels like ‘folk’ are sterile and often obscure the eclecticism upon which supposedly pure musical forms are based. “It was no good me sticking my nose up,” he says, and judging one kind of music as ‘good’ and another as ‘bad’. I needed to earn a bloody living! I was though a total purist in terms of just playing…yes. My business card still says: ‘No backing tracks, no effects, no vocals; just guitar.’ I wasn’t anti this or anti that though; I was just against anything that distracted from me playing. I still am.”

Don’t forget, he said, what were later called ‘folk clubs’ were places for entertainment, for blokes to try to pick up girls…for drinking and for smoking. Kelvin paints a picture of Eastbourne folk clubs in the 1960s and early 1970s that’s a long way from the preciousness of those who often ran folk venues. Other big names would come down, he says, recalling that he put John Renbourne on at The Lamb, and that Martin Carthy played at the Terminus in the 1980s.

For Kelvin it was, and is, all about the music, any music. “If you wanted country I could do that; classical, no problem.” He and Andrew Walker, a guitarist and composer, formed ‘Third Half’ in the 1980s as a self-consciously ‘contemporary’ folk outfit, playing their own material rather than so-called standards. Another Kelvin vehicle, ‘Just Guitars’ did what it said on the tin. The ‘Old Town Band’ featured Kelvin on banjo and guitar, along with Paul Rawlinson, in folk-based sets that would sometimes stray into rock or classical styles. Kelvin also helped to organise folk and other music events, including the Eastbourne Folk Festival, which took place over several days throughout the 1970s and '80s, including at the Bandstand - “a nightmare for lugging gear to, unless you had a boat,” he says. “It’s since been replaced by f*****g Airborne,” he notes. One renowned performer he remembers putting on at The Tivoli in the 1980s was American folk singer Julie Felix. Asked to recall what it was like to have worked with this international star, Kelvin soon found an appropriate Anglo-Saxon phrase.

Through all these years Kelvin has remained a guitar teacher and technician. In the 1990s a Fureys and Davey Arthur gig at the Congress Theatre in Eastbourne was rescued by Kelvin sorting out Davey’s guitar and delivering it right to the stage door. In the 1980s Kelvin performed a similar feat at a Birmingham NEC gig organised by Jeff Lynne and featuring a former member of the Fab Four who was about to play live for the first time in a decade. As George Harrison nervously prepared to hit the stage, his allotted guitar started playing up. Kelvin was on hand to sort it out. As a guitar tech, Kelvin could have become a semi-permanent feature with ELO, but says phlegmatically, “If I’d been offered a job on, say, bass, that would have been different. I didn’t want to end up as a bleedin’ roadie.” Steady, predictable, income was key. Kelvin has many album credits though, usually, he says, as guitar tech.

For several decades Kelvin has been a guitar player, engineer and tutor, for much of that time he had wives and kids to support. He still teaches and repairs guitars in a front room workshop at his long-time home in Eastbourne. Kelvin still plays regularly too, including at a seafront ‘Shadows Club’, in homage to the seminal guitar band. Interesting studio work continues to come his way as well. He plays guitar on Ruben Vine's sci-fi comic/punk concept album, "The Life and Times of an Imaginary Rock Star", which has just been released on vinyl, CD and as a download.

Kelvin is still keeping on keeping on. He betrays no hint of resentment for what might have been, other, perhaps, than some sadness for what the music business can do to family life. 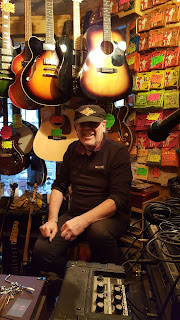